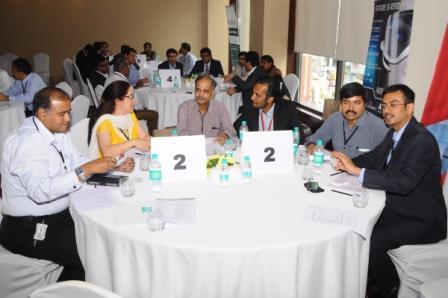 The CSO Forum Mid-Year Summit– the premium event for enterprise security decision makers – was held in Bangalore recently. Attended by the country's top CSOs, the event saw the most relevant and topical security issues getting discussed. The  day-long event, attended by more than 60 CSOs, addressed such topics as DDoS attacks, data protection and the legal regime, identity thefts, security for digital payments, and mitigating risks and maximizing business efficiency.

The day started with a session by Amod Malviya, Senior VP & Head - Engineering, Flipkart.com. Speaking on the topic of 'Integrating Security Into the Application Development Process,' he said CSOs were operating under the illusion that their enterprises were secure. However, there were gaping holes in their security infrastructures, and they needed to become more proactive.

Vishal Salvi, Senior VP and CISO, HDFC Bank, called for all the banking CSOs to come together so as to approach and overcomesecurity issues collectively.“Today, when I approach a merchant and ask him to be compliant, he can simply approach another bank. So, since the banks don’t talk to each other, merchants take advantage of this situation. The need of the hour, therefore, is to get the CSOs and the business people, who are into merhcant on-boarding, together.The first challengeis bridging this gap and then going collectively,” Salvi said.

CSOs in discussion during the Ideas Cafe. The innovative format saw CSOs being divided into six groups. Each group discussed one security topic on a table before moving to the next.

Sajai Singh, Partner, J Sagar Associates & President, ITechLaw delivering his presentation on 'CyberSecurity & the IT Act' during the Summit.

Arun Goyal, Sr VP & Head IT Infra & TechnologyConsulting at MPS Limited asks a question duringone of the presentations at the event.

The Eagles have played 10 games in 10 days, having won three in the preceding 10 matches.

Roughly seven weeks ago, the Eagles were playing for their first premiership since 2002.

Then they lost their first game in Sydney since 2006 against the Melbourne Storm, losing 26-19.

The Eagles are now sitting at 13th in the table - one place outside the top eight of the ladder after 23 games, the third-worst record in the competition.

And while they haven't beaten a Top 14 opponent, they've also yet to visit the top four - a feat they only did in 2006 against Western Bulldogs and last season against West Coast.

While the Eagles could still have their best win on the road against the Cats, and then their worst against Fremantle after the first quarter of this season, the game against them was also a test of their ability to overcome adversity.

"I've got to say I am enjoying the challenge this week but there will be ups and downs and we will learn and grow," coach Phil Gould said.

"This is what we do as a football club and we will take it from here. We have learnt all that we need to. We are in the best form of our lives.

"Our next challenge is to keep the momentum and build on that."

The Eagles lost a number of key players with two days off this weekend, though it remains unclear whether they will be able to get back to full fitness.

Drew Hutchison (groin) and Rory Laird (ankle) are the only Eagles who have missed last week's game at Fremantle.

Gould was pleased with the way his side responded in a win over the Crows at the MCG in round three, but also said there were still some things missing from its attack.

"It shows we have to get back into our own rhythm. That has been our problem this year and there is nothing wrong with that," Gould said.

"We have all got to keep playing our game and do something about it.

"Some of the issues we have had with the midfield have been there for a while now. Some young boys have been coming back.

Animal rights activists have been concerned that the meat comes from animals who are dying before their eyes because of over-consumption. It has made much of meat production methods illegal in the USA as well as several European nations, including Germany and Sweden. One common argument made by anti-meat campaigners is that eating meat would be bad for the environment.

Meat is processed and frozen in a way that can lead to it being released into the environment. In fact, according to a recent study published in the Journal of Science and Medicine, there are a lot of problems with meat production methods in Japan as well. The researchers discovered that meat meat production systems are responsible for at least 50 percent of the landfills generated in Japan.

"It's very important that we focus on meat alternatives to stop its growth on our land," said Japanese vegetarian Shigeo Kawamori, an environmental campaigner and director of the Tokyo branch of vegetarian activist group the Friends of Animal Rights and Frugality. "Meat is a major source of methane. If we don't manage the land and the environment in Japan to prevent this, it will continue to pollute the air for many decades into the future."

In an attempt to address the issue, the Friends of Animal Rights is currently setting up a new company named Animal Equality, Inc to create alternatives to meat that are more sustainable. Animal Equality, Inc. will be an animal welfare group which will be responsible for producing and market the products and will help promote the vegan lifestyle and environmental awareness to a new generation of consumers.

Some other groups such as World Animal Protection are also beginning to push the vegan lifestyle in a new way in their work, using the vegan lifestyle to raise awareness and raise funds. Some of the group's major donors include McDonald's, Wal-Mart, Walmart, PepsiCo and PepsiCo (s pax). They have funded an environmental study, as well as a successful project in Taiwan.

Vegans and vegetarians will undoubtedly have their own opinions on how they feel about meat, but the issue of whether meat is good for the environment has proven to be an uphill battle over the years. The issue is not going away anytime soon.

[b][url=https://labedroom.com/]Bedroom losangeles[/url][/b]
Come in outstanding store in Jefferson Park production for office and home use and cafe! presents over 12000 appointment furniture and goods for a country house and apartments or restaurant. Natural rattan , are used for the purposes of production our branded products , possesses strength and wear resistance, wonderful external data. All furniture processed special compounds, due to which their surface does not absorb water, stable to extremes ambient temperature air and exposure of the sun. Vya our furniture excellent retains its functions even in restaurant in open spaces . In the presented online catalog you offered photos furniture for dining room, hall, bedroom, children's room , as well as intended for organization of storage area - dressers and cabinets, cabinets and others . In our store in Fairfax you can buy everything for any your home not expensive . We invite client come to store , holding in Westwood what cares about its shopper.

cialis once a day prezzo

cialis once a day prezzo

I got this web site from my