Why this year will define a new order to gender equality in enterprises? 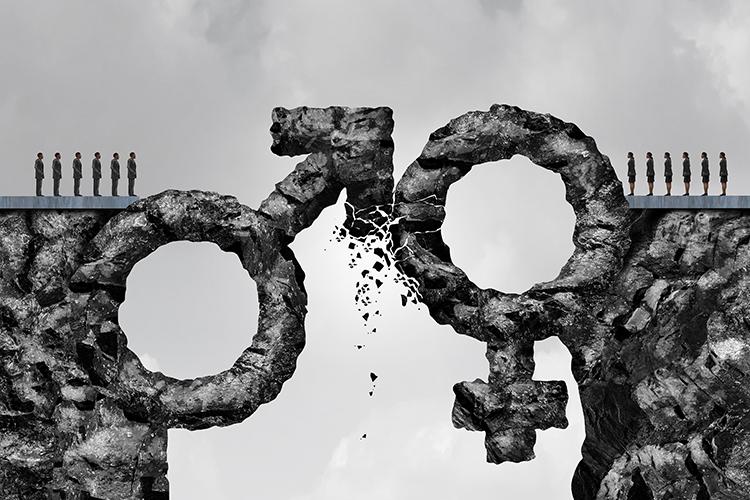 Many years ago when cloud deployments were at their peak, during an interview, an Indian woman CIO was talking about how tough it was for her to say goodbye to legacy hardware and deploy a hybrid cloud strategy. She made a reasonably strong case for the hybrid cloud and indicated a growing acceptance among CIOs to reposition their cloud strategy—from purely private to hybrid. Incidentally, it was the first time that we were interviewing a female IT leader and we used the opportune moment to throw the 'glass ceiling' question at her. To our utter amazement, her reply wasn’t quite expected. She said that she had never faced gender bias – unconscious or conscious –in her two decades of technology experience. She didn’t advocate gender equality norms but hired in a meritocratic manner. At the very least, one would expect women to be advocates of gender equality in the workplace. But that’s where one can be wrong. In the course of time, we interviewed several women leaders in enterprise IT – and almost all of them said that they didn’t position themselves as “a woman in technology”. In the years that followed, we posed this question to male CIOs who responded rather evocatively. A male CIO of a large retail conglomerate told me then. He said that men are uniquely positioned to advocate gender equality in the workplace. “Keeping an open mind and showing willingness to understanding the gender inequalities facing women is the first step,” he added.

It reminded me of a quote by a renowned Nigerian author, Chimamanda  Adichi, who said, “It would be a way of pretending that it was not women who have, for centuries, been excluded. It would be a way of denying that the problem of gender targets women.” She further said that the problem was not about being human, but specifically about being a female human. “For centuries, the world divided human beings into two groups and then proceeded to exclude and oppress one group. It is only fair that the solution to the problem should acknowledge that.”

When push comes to shove

Today world leaders are committed towards making gender equality a norm. Canada’s prime minister, Justin Trudeau, was in news for creating a gender equal cabinet in 2015. This year, the Government of Canada has announced that it will introduce proactive pay equity for workers in federally regulated sectors. According to reports, it is estimated that through this legislation alone, the gender wage gap can be moved from 88.1 cents to 90.7 cents in the federal private sector alone.

Iceland is another example of a government that’s taking stringent measures to curb gender inequality – prohibiting pay gap between men and women.

If countries and governments can alter their laws, so can enterprises. However, the push has to come from the top.

Gender diversity is a business imperative; inclusivity is a strategic imperative

What does that mean? According to a study by McKinsey Global Institute in 2015, advancing women's equality could add USD 12 trillion to global economic growth in a decade, raising it by 11%, compared with the business-as-usual scenario. The Indian economy would be the biggest gainer of gender equality as its GDP could be 16% higher in 2025, the study claimed.

Geetha Kannan, managing director, Anita Borg Institute (ABI), India, says, the corporate world has started looking at gender diversity with a different lens today and we are very hopeful that this will eventually move the needle. ABI has worked to improve the representation and advancement of women in computing for two decades.

It was founded by a computer scientist Dr. Anita Borg in 1987 who wanted to start a digital community for women in computing. Over the years, that community has grown and changed to become the leading organization for women in technology and in spreading the message of keeping women in the technical workforce.

It’s been more than 40 years since women joined the corporate workforce and more than 20 years since organizations drafted their first diversity policy in the workplace. According to Mercer’s global research in 2015, women make up only 35% of the average company’s workforce at the professional level and above and only 20% of its executives. Even worse, the average organization still isn’t on track to achieve gender equality seven years from now. For years now, the report stated that women have been underused in the workforces of emerging economies. This is due to factors such as lack of mentorship or support on the job from colleagues or bosses, child and elderly care.

For a long time now, the business case for having women in decision making positions is quite obvious. Catalyst research in 2017 revealed that companies with a higher percentage of women in executive positions have a 34% higher total return to shareholders than those that do not. The value of diversity on the decision-making table is common knowledge. However, easy consensus often makes the business outcomes sub-optimal, if not altogether  disastrous. According to Kannan, a lot of companies have started seeing women in their organizations as resources for leadership and innovation. As a result, there has been an increase in interest from the upper ladder. In enterprise IT circles also, some of the top positions are occupied by women.

ABI organizes partner meetings includes representatives from companies who are looking to shape a diverse workforce with robust representation of technical women at all spread levels. Kannan said that in the last few years, these meetings are attended by top executives in decision-making positions who take an active part in the dialogue.

Women make up half the world’s population and only a little more than a quarter join the workforce, and less than 10% are in leadership positions. According to Accenture’s new report titled ‘Getting to Equal’, the digital fluency scores provide an overall measure of the impact of digital on working men and working women today by country and by generation.

Although women are beginning to achieve gender equality and close the gender gap in IT by developing digital fluency, they remain under represented in the workforce in most developed countries. The report found that India’s low levels of digital fluency are hindering the progress of women. Increasing women’s access to the Internet as a first step to improving fluency should help open-up new work opportunities.

The report found that India’s low levels of digital fluency are hindering the progress of women. “Organizations are most effective when gender composition aligns with the audience the organization is serving. Right now, this is not the case. IT organizations that have an imbalanced workforce are less able to anticipate and proactively address customer needs,” noted Accenture in the report.

Accenture has 150,000 women, which is nearly 40% of its global workforce. Over the past several years the company has devoted itself to creating new milestones on the path to gender equality which includes growing its percentage of women managing directors to 25% globally by 2020.

Kannan said that increasing the number of women in leadership teams could allow CIOs to improve gender equality and access the skills they need to be successful.

It will take us 217 years to gender parity

And that’s why we must start now. Employers have a critical role to play in creating gender parity. Many research bodies over the years have indicated that higher female representation in the workplace and various company performance measures, including better financial performance; higher return on sales, equity and invested capital; higher operating results; better stock growth and more. One of the companies in the IT/ITes to do it first in 2015 was Intel CEO Brian Krzanich who pledged USD 300 million to increase the company’s grow workforce diversity with the goal of reaching equal representation among its 50,000 U.S. employees.

Companies are finally putting the money where the mouth is. Not only has Intel used this money in training and recruiting female and other groups of under-represented computer scientists.

Since the diversity pledge, the company’s business has seen a 65% improvement in the representation of female and minority talent. However, the icing on the cake was when it announced that it had eliminated gender pay gaps between employees in 2015. This sent a clear message to the rest of the industry that equal pay among male and female workers is possible. Intel proved that prioritizing gender parity in tech is possible, without sacrificing revenue or results.

The other bigwig in the tech circles is GE, who is one of the tech companies doing the most to reach tech gender parity with an aggressive goal set to reach a 50-50 gender ratio in its technical entry-level workforce by 2020. One the major problem in technology is the interminable STEM gender gap.

GE promises to bridge this gap by hiring 5,000 more women in STEM roles in the next two years. The initiative is expected to increase the representation of women in its engineering, IT, and product management roles. Clearly, there is a lot of work yet to be done. GE’s announcement came within the past year so while there are no results to show just yet, the very public announcement is definitely a step forward and it enables a level of accountability on a major scale. The industry is inundated with examples comprising companies with the lack of female leadership. Adobe India, on the other hand, has achieved gender parity in India, and therefore, stands alongside Intel and GE, in becoming case studies for other organizations to follow. A majority of tech companies including mammoths such as Facebook, Google, and Microsoft have more work to do when it comes to equal representation of women on their tech teams. While both Facebook and Microsoft have eliminated the gender pay gap among their male and female workers. Google, still hasn't reached full gender parity in tech.

In a joint paper released by IMF Chief Christine Lagarde and Norway's Prime Minister Erna Solberg at the World Economic Forum (WEF) annual meeting in Davos this year, raising women's participation in the labour force to the same level as men can boost India's GDP by 27%. Unfortunately, India has seen a decline in its overall Global Gender Gap Index ranking, largely attributable to a widening of its gender gaps in Political Empowerment as well as in healthy life expectancy and basic literacy.

Take Iceland for instance, which has closed more than 87% of its overall gender gap. On 1st Jan, the Nordic country became the first in the world to 'paying men more than women' illegal. The legislation on gender pay in Iceland states that companies and government agencies employing at least 25 people will have to obtain government certification of their equal-pay policies. Companies and agencies that fail to prove pay parity will face fines.

To eliminate gender parity in India or the rest of the world, countries need strong laws on pay parity. After all, the first step is providing equal pay for equal work, regardless of gender. What better than the enterprise IT community to lead this change in 2018?

Article Tags:
gender equality
Women in IT
Enterprise IT
women leaders in the enterprise
2018's focus: Women in IT