How Indian payment landscape is changing

And why understanding that may be crucial for your business planning 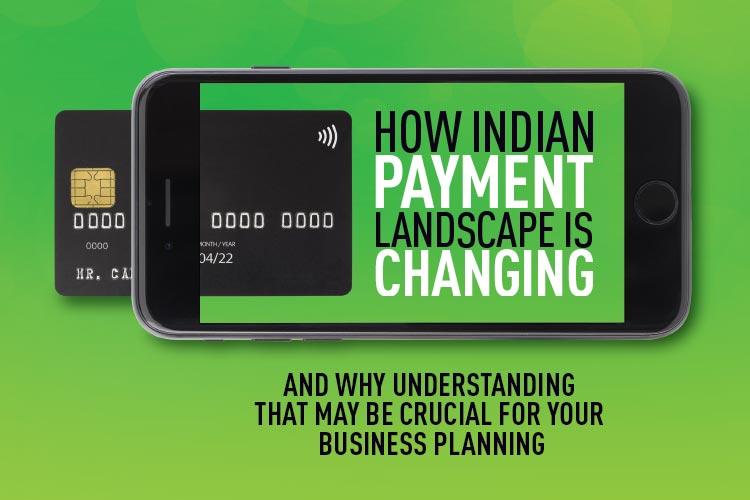 Reserve Bank of India has been following a very conscious and comprehensive plan to boost digital payments in India. India’s payment strategy is driven by its three-yearly payment systems vision statements 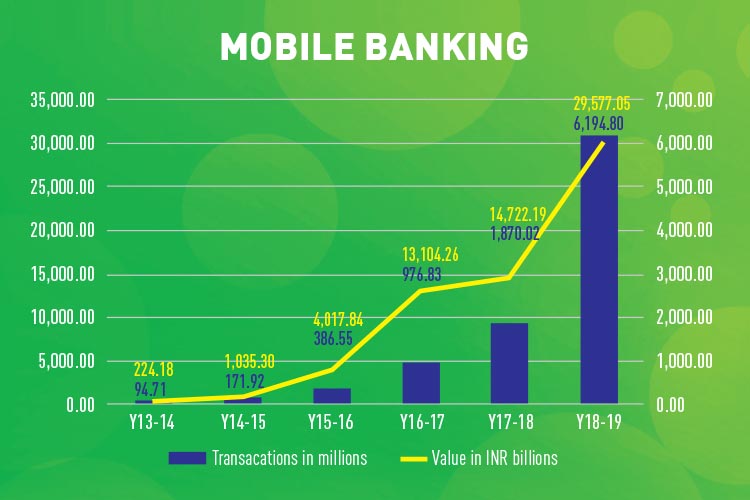 While it is understood that value of m-wallet transactions are smaller, what is surprising is that the number of transactions has shown an even lower growth—just 37%. The growth has steadily fallen from 170% in the demonetization year to 86% in 2017-18 and further halved to 37% in 2018-19. 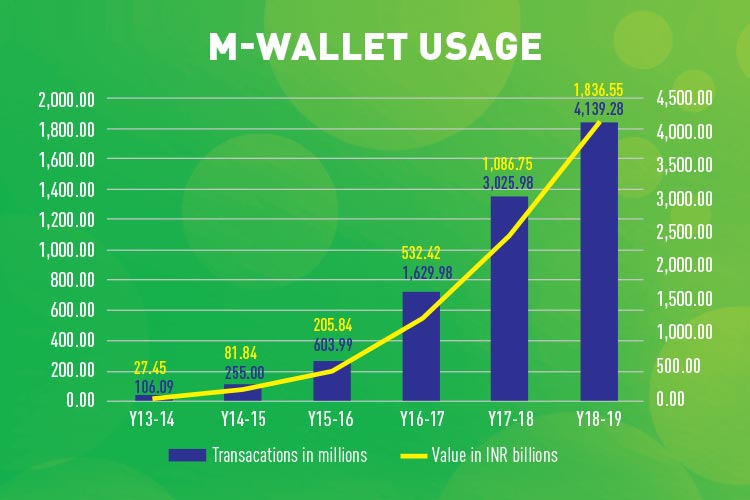 So, what does this reveal? While no one can deny the role mobile wallets played in the two months after demonetization, it seems users have drifted away from mobile wallets, despite a number of mobile wallet players entering the business and some launching high profile marketing campaigns, supported by attractive promotional schemes like cashbacks.
While one section—having experienced electronic payment’s benefits—have moved to a more mature segment like mobile banking which uses their bank accounts and does not block money in wallets, another, which was forced to use mobile wallets because of cash problems using demonetization and its immediate aftermath, seems to have gone back to cash.
A regulator-imposed upper limit in m-wallets may have impacted the growth of  total transaction value in mobile wallets. However, it cannot impact number of transactions too negatively if the user base is growing and users are actually using it.
This—of users shifting most definitely to a more mature service like mobile banking from mobile wallets—is one of the most revealing trends which has implications for how consumer businesses should plan for their digital businesses.
Cards may not be as new a payment mechanism as some of the other digital payment methods—and there may not be as disruptive trends to notice. But the usage data of cards show clear and specific trends that are meaningful for business decisions.
Credit cards debuted much before debit cards in India. Yet, it has been restricted to a niche segment—thanks partially to lack of a robust credit rating mechanism and the aversion to ‘credit’ as a cultural issue among Indians.
Today, in a country of one and half billion people, there are less than 50 million credit cards. With many users being multiple card holders, the actual number of people who use credit cards may not be more than 25-30 million.
Debit cards, on the other hand, have been ‘thrust’ upon the banking users. Today, every bank ATM card is a debit card that can be used to pay using a PoS terminal at a merchant location. Yet, most use it as simply to draw cash from ATMs.
The two card instruments—credit card and debit card—though hyphenated often are two different animals.
Look at the contrast. More than 924 million debit cards in circulation in India accounted for just INR 5935 billion worth of transactions on PoS (excluding cash withdrawal from ATMs). Just 47.1 million credit cards were used to spend more—INR 6033 billion to be precise—by its users.
A debit card user makes an average payment of INR 550 a month while a credit card user makes a payment of an average INR 11900 a month!
While growth of both has slowed down, debit cards got an impetus during demonetization. The instrument, which was showing an average growth of 30% before that, spent 108% more in the demonetization year 2016-17 as compared to the previous year, 20115-16. Credit cards did not witness any such spike. 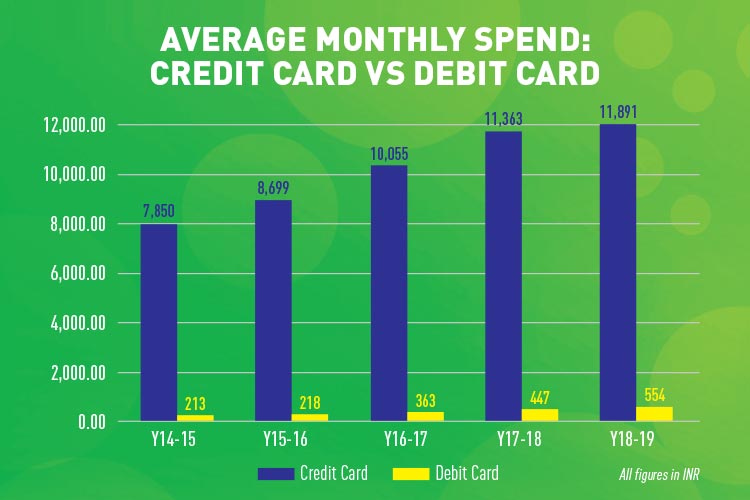 With India’s new Payment Systems Vision 2021 clearly expressing an intent to move towards not just a less-cash society but also “to have a less-card India”, cards have a limited shelf life. Card companies have already started virtual cards and are beginning to market them aggressively.
That brings us to IMPS—predominantly used for P2P transactions—which grew at a CAGR of 132% in terms of value in the five year period between 2013-14 to 2018-19 while showing a 108% CAGR in number of transactions in the said period. IMPS too accelerated during demonetization but not to the extent that mobile wallets and debit cards did. 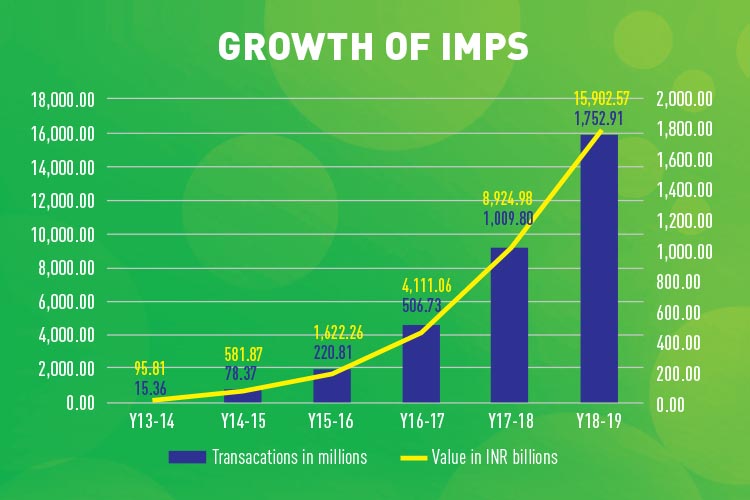 Future Expectations
Contrary to popular perception, the surge in digital payments (even leaving out cards), did not start with either demonetization or Digital India. Reserve Bank of India has been following a very conscious and comprehensive plan to boost digital payments in India.
India’s payment strategy is driven by its three-yearly payment systems vision statements. It is interesting to examine how the vision has progressed. In 2005-08, the vision was “the establishment of safe, secure, sound and efficient payment and settlement systems for the country”. So, it was an intent, more than anything else.
The next vision document (2009-12) became bolder when RBI asserted that it wanted to “to ensure that all the payment and settlement systems operating in the country are safe, secure, sound, efficient, accessible and authorized”. It was now no more an intent; it was a mandate it gave to itself as a regulator by promising to the nation that it (RBI) would make it happen.  Also, with the UPA government focused on aam aadmi and social inclusion, financial inclusion as an idea was taking strong roots among policy makers. That thrust saw RBI adding “accessible” to its Payment Vision. It was sort of a passive intent towards inclusion.
That passive intent became a proactive stance in the next vision document (2012-15) as it added the word “inclusive” to the vision. But that addition was along expected lines. What was more noteworthy were the addition of interoperability and compliance.
The vision statement for 2018—the first after a new government took over at the centre, maintained continuity. It did not add any such new deliverables captures the implementation thrust quite unequivocally, by identifying the four pillars of achieving the vision of less-cash society.  Two of those pillars—responsive regulation and robust infrastructure—were mostly about detailing of earlier plans or some augmentation in terms of specific tasks. Customer centricity was a new thrust but the document was devoid of any ground-breaking new plans or ideas there. The real takeaway of the 2018 vision was effective supervision. It was a mechanism for making the players—banks and other payment operators—more accountable and also more responsible, without RBI explicitly acting like a school master to ensure that each task is achieved.
In the time-tested way of RBI policymaking, the new payment vision 2021, released in May 2019, took
the new idea introduced in Vision 2018—customer centricity—to make it the central focus of the new policy statement.
Vision 2021 concentrates on a two-pronged approach of, (a) exceptional customer experience; and (b) enabling an ecosystem which will result in this customer experience.
The Vision aims at:
a. enhancing the experience of customers
b. empowering payment system operators and service providers
c. enabling the ecosystem and infrastructure
d. putting in place a forward-looking regulation and
e. supported by a risk-focussed supervision
To achieve these goals, the Vision has four contours, it calls the 4 Cs–Competition, Cost, Convenience and Confidence. These four address innovative regulatory models like regulatory sandboxes for competition, efficiency through that competition helping reduce cost, better access to multiple payment systems and a no-compromise approach towards security that would enhance user confidence.
RBI has already completed a benchmarking exercise of India’s payment systems with 20 other countries, identifying each aspect (41 indicators in 21 areas) of India’s payment system as a leader (if ranked 1st to 3rd), strong (if ranked 4th to 9th), moderate (if ranked  10th to 15th) and weak (if ranked 16th to 21st).
According to that, India emerged as a leader across a dozen indicators. Those directly concerning with digital payment are:
India’s payment system was found to be lacking (weak) in the following digital payment areas which RBI will address:
While some of them such as cheque volume and decline of cheques cannot be addressed overnight, digital payment of utility bills can be significantly enhanced with right capacity building and policies.
In January, RBI had appointed a High-Level Committee on ‘Deepening of Digital Payments’ headed by Nandan Nilekani. The committee has already submitted its report in May. It has recommended a number of steps to RBI, government and businesses.
Some of the important recommendations include:
In addition to these key recommendations, the committee has suggested capacity building, promoting digital literacy, tracking inclusion, enhance accessibility, use vernacular languages and similar initiatives to promote digital payments.
Businesses should expect some of these recommendations to become realities in next two-three years. It is advisable that they actively follow the real rollout on ground to get a realistic assessment of where digital payment is going. That will help them prepare better for the new real digital India, where the culmination of business—payment—is fully digital.
Real digital transformation strategies cannot ignore this most fundamental environmental change.
Read the ITNEXT June 2019 Magazine