This is the 12th consecutive quarter of declining PC shipments 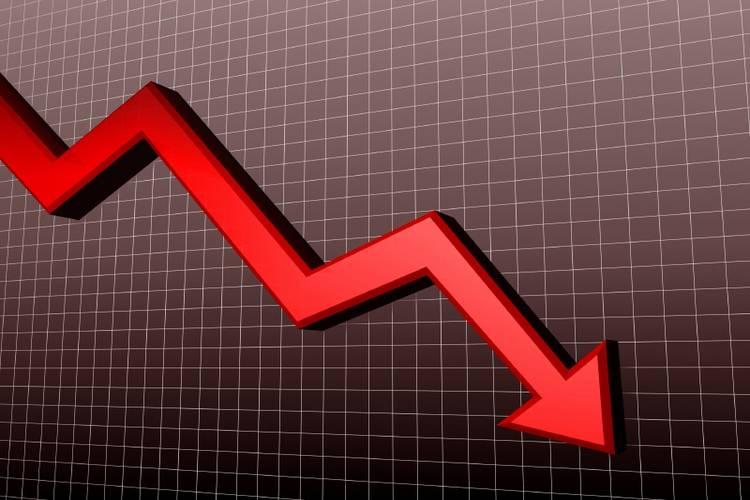 "While there were signs of stabilization in the PC industry in key regions, including EMEA, Japan and Latin America, the relatively stable results were offset by the US market, which saw a 10% year-over-year decline in part because of a very weak back-to-school sales season," said Mika Kitagawa, principal analyst at Gartner. "Business PC demand, led by Windows 10 upgrades, continued to drive PC shipments across all regions, but its refresh schedule varies by region. The countries with stable economies, such as the US, have created a positive sentiment among businesses, especially for small and midsized businesses (SMBs), which are more vulnerable to external events, such as economic or political."

There are ongoing component shortages, with DRAM shortages getting particularly worse during the third quarter of the year compared with the first half of 2017. "The component price hike impacted the consumer PC market as most vendors generally pass the price hike on to consumers, rather than absorbing the cost themselves," Ms. Kitagawa said. "We expect the DRAM shortage to continue to the end of 2018, but it will not be reflected in the final PC prices immediately."

In the third quarter of 2017, HP and Lenovo were in a virtual tie for the top spot in the PC market based on shipments (see Table 1). However, HP is in an upward trend, as it has experienced five consecutive quarter of global PC growth, while Lenovo is in a downward trend with declining shipments in eight of the last 10 quarters. 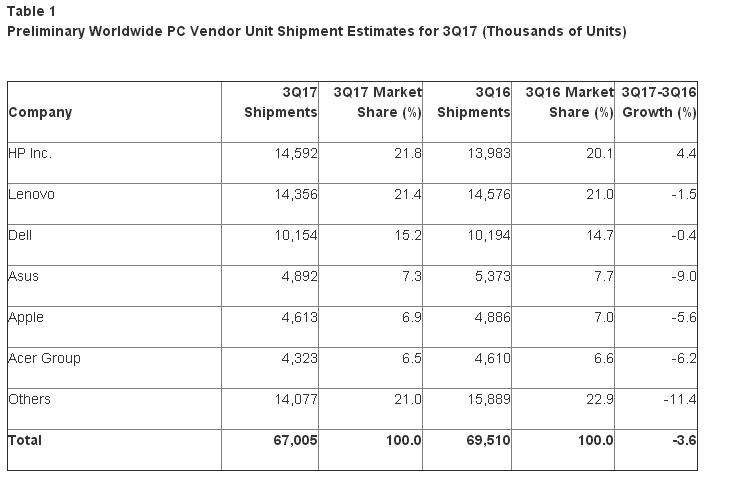 Notes: Data includes desk-based PCs, notebook PCs and ultramobile premiums (such as Microsoft Surface), but not Chromebooks or iPads. All data is estimated based on a preliminary study. Final estimates will be subject to change. The statistics are based on shipments selling into channels. Numbers may not add up to totals shown due to rounding.

HP experienced growth in all key regions, except the US market. The company experienced double-digit growth in Latin America, while in Asia/Pacific HP secured positive growth for the fifth consecutive quarter. Lenovo experienced its steepest year-over-year decline of PC shipments in the US since it acquired the IBM PC business division in 2005. Lenovo continues to face the dilemma of market share gains versus profitability. It appears the company is putting more emphasis on profitability than share gain. Dell's worldwide PC shipments were slightly down compared with a year ago, as it registered its first year-over-year shipment decline since the first quarter of 2016.

"Weak back-to-school sales were further evidence that traditional consumer PC demand drivers for PCs are no longer effective," Ms. Kitagawa said. "Business PC demand is stable in the US, but demand could slow down among SMBs due to PC price increases due to component shortages." 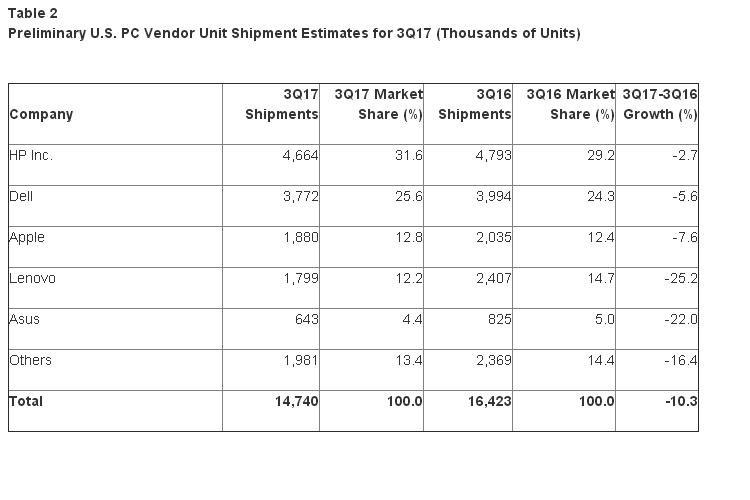 Notes: Data includes desk-based PCs, notebook PCs and ultramobile premiums (such as Microsoft Surface), but not Chromebooks or iPads. All data is estimated based on a preliminary study. Final estimates will be subject to change. The statistics are based on shipments selling into channels. Numbers may not add up to totals shown due to rounding.

PC shipments in EMEA totaled 19 million units in the third quarter of 2017, a 1.1% decline year over year. The contraction in the Western European PC market appears to have slowed down, with the potential for stability in the fourth quarter of 2017. Eastern Europe is experiencing flat to small unit declines as demand is not improving, and there is no obvious impact yet from the Windows 10 migration in the business segment.

In Asia/Pacific, PC shipments reached 24 million units in the third quarter of 2017, down 2.1% from the same period last year. While consumer demand remained lackluster, PC demand in the business segment remained steady, especially for notebooks. In China, the PC market is estimated to have declined by 5% in the third quarter of 2017, with more stability in the business market, particularly in large enterprises, than in the consumer space.