The First 100 Days of Learning as CIO was Enormous

Next100 winner Shaffic Ahamed, Country Manager-IT, Sandvik, who moved up to become the CIO, finds the greatest learning has been to bring in a positive and flexible change in behaviour 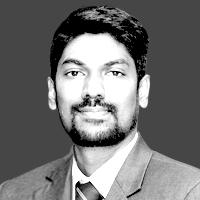 The first 100 days for Shaffic Ahamed, the Country Manager-IT at Sandvik, handling global IT has been very educative and experiential, chock-full of much learning and unlearning. After serving as Manager-Web Technology at Bangalore-based Ingersoll Rand, Ahamed moved up to the current role—one which brought in several surprises and challenges.

Ahamed candidly says, “My greatest unlearning was to give up on rigid behaviour, become more flexible in thinking, depending on the demands of the situation. I understood that being rigid definitely prevented one’s growth.”

The important lesson he learned was to be polite with teams, and think and act swiftly before making any decision. “I also learned how to lay down priorities and weigh them, based on several parameters after looking at the situation, and to take a call and frame a plan of action,” says Ahamed.

Moving to a new vertical was no less challenging. Ahamed listed out expectations as a CIO--according to him, the primary task was to understand the product line, business model and company culture, to measure the change factors that needed to be taken note of in order to help the business in meeting its objectives.

Setting up his own agenda was the first move for Ahamed in his new job. “Having worked for a 150-year-old US MNC for almost 8 years and understood various business facets, it was new learning to understand what a European MNC of a similar 150 years of standing looked like from an end-to-end business point of view.”This kind of understanding and effort to get key business insights of legendary US and European businesses helped Ahamed chalk out a successful IT plan for the Indian market.

However, the biggest challenge was to have to gauge the expectations of the Indian market and apply the legacy of a 150-year-old European culture within the system and evolve a suitable structure for a business friendly model. A few steps that Ahamed found important were to organise a kick-off meeting with key stakeholders in over 60 members in an offsite, to begin with.

“This kind of meeting was well received and appreciated by members from the business and management functions--which helped in setting up a good platform to bring about alignment. Also, creating mutual harmony and a feeling of trust between various teams was crucial,” says Ahamed.

Ahamed has several moments he cherishes in his new journey.

Ahamed realised that it was important to believe in oneself and always act to the best of one’s ability—then, one could be assured of career growth.

“My earlier experiences really helped me understand the depth of my new job and take measured steps towards the next winning path,” says Ahamed.

Ahamed had faced some conflicting moments which forced him to take bold steps and decisions, but being patient and understanding the situation definitely helped him overcome the challenges.

However, his first key initiative was to get the competency map created to define the objectives of the Global Competency Center.

The lack of technology skills is contributing to a dent in productivity as workers struggle to adapt to working from home over prolonged periods, according to a Questionmark study. So, employers need...
Jul 03, 2020
408
0