5 Suggestions for IT Managers Across Industries to Exploit IoT 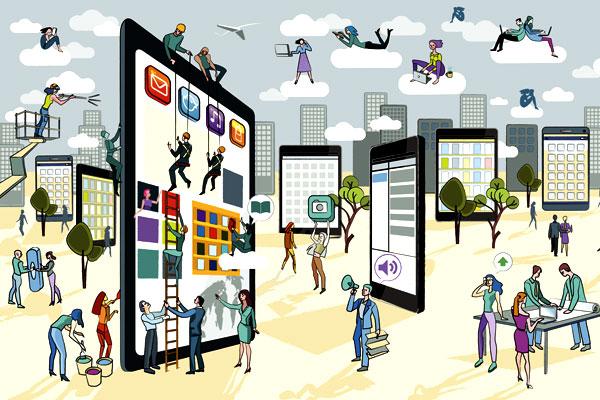 What are the key drivers of Internet of Things?
The confluence of efficient wireless protocols, improved sensors, cheaper processors, and a number of start-ups and established companies developing the necessary management and application software has finally made the concept of ‘Internet of Things’ mainstream. Consumers are currently the key driver for this data explosion in the digital universe with their increasing use of connected devices, such as smartphones, tablets, fitness tracker bands, and smart watches connected to the internet. Besides devices, RFID, near field communication, barcodes, QR codes and digital watermarking form an integral part of the IoT revolution.

What is the market size of IoT?
The market opportunity of IoT is humongous as per analyst predictions. According to Gartner, IoT will include 26 billion units installed by 2020, and by that time, IoT product and service suppliers will generate incremental revenue exceeding $300 billion, mostly in services. While IDC expects the technology and services revenue of IoT to expand from $4.8 trillion in 2012 to $7.3 trillion by 2017 at an 8.8% CAGR; Cisco estimates that 50 billion devices and objects will be connected to the Internet by 2020. With the smartphone and Internet revolution, India is not far behind in the larger scheme of Internet of Things.

IoT will include 26 billion units installed by 2020, and by that time, IoT product and service suppliers will generate incremental revenue exceeding $300 billion, mostly in services, Gartner.

Why is BlackBerry betting big on IoT?
As connectivity costs continue to fall and connected technologies become pervasive, the Internet of Things market is emerging at a rapid speed. No other company is in a better position than BlackBerry to provide the technological building blocks, applications and services needed to enhance productivity, improve real-time decision making and deliver on the vision of the Internet of Things.

BlackBerry has recently unveiled a series of initiatives, codenamed Project Ion, to help businesses easily connect people, devices and machines, and derive value from these connections. Project Ion is a cornerstone of BlackBerry’s vision to offer end-to-end solutions for the Internet of Things. BlackBerry will facilitate the Internet of Things ecosystem which consists of partners, carriers and application developers by looking to connect an ever-growing number of Internet-enabled devices on a secure public applications platform.

What’s the state of affairs in terms of the regulatory framework?
Technology is gaining acceptance so rapidly and the opening-up of the telecommunications market has acted as a catalyst. Various government bodies across the globe are working to adopt legislation in tune with technological progress and market requirements. Some decision-making bodies inEuropeare already working towards the legislation.  These developments will give rise to the adoption of a new regulatory framework to protect privacy and data of individuals and organizations at IOT gains more acceptance.

How is BlackBerry going to facilitate IoT ecosystem? What all industry verticals can leverage your IoT offerings?
BlackBerry is uniquely positioned to be a leading player in IoT space with QNX and our open mobility ecosystem approach. BlackBerry and QNX have a long history of developing solutions that can create a connected ecosystem of devices and machines. Solutions that connect and support the Internet of Things, including embedded platforms, networks and devices, are at the core of QNX offerings. QNX has a specific group called the QNX Software Systems’ new Cloud business, which is dedicated to bringing such solutions to market in a timely and cohesive manner. Time-tested for 30 years, QNX technology has proven itself in everything from in-car infotainment units to high-end routers and life-critical systems such as air traffic control systems, surgical equipment, and nuclear power plants. Audi, BMW, Cisco, GE Energy (Industrial Turbines), Emerson, Land Rover, United States Postal Service, General Motors, Siemens Medical, Johnson & Johnson, Caterpillar, Honeywell are some of the well-known customers across sectors like Automotive, Power & Energy, Telecommunications & Networking, Healthcare, Industrial, Security & Defence where QNX technology has enabled success over the years.

Enterprise Challenges: First and foremost priority should be to assess the existing challenges being faced by an organization.

Security: With the advent of IoT and connected devices, security will be a crucial factor to keep in mind while implementing technology solutions.

Data: Another aspect to keep in mind is the data deluge that will accompany IoT. This will also mean processing large quantities of IoT data in real time which will increase the workloads of data centers, leaving providers facing new security, capacity and analytics challenges.

Consumer Privacy: User privacy concerns will need to be managed with the advent of connected technologies and IoT.