Amazon Web Services (AWS) is still larger than its four main competitors combined in the cloud infrastructure service market, and continues to grow faster than the market as a whole, finds the Synergy Research Group. 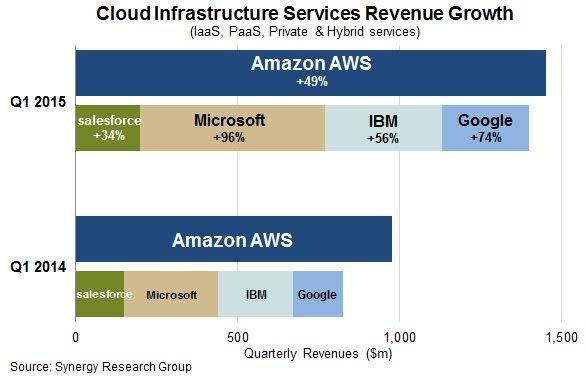 While Google is quietly gaining share,  it remains just half the size of Microsoft in this market, while Salesforce, once the unquestioned leader in PaaS. However,  Microsoft has had the highest revenue growth rate, and IBM remains the king of the private & hybrid services segment.

Synergy estimates that quarterly cloud infrastructure service revenues (including IaaS, PaaS and private & hybrid cloud) have now crossed the $5 billion milestone, despite revenue growth in the quarter being constrained by the strengthening US dollar. Trailing twelve-month revenues now exceed $17 billion, with the annual revenue growth rate running at around 45%.

“Across the full and varied spectrum of cloud activities there are now six companies that can lay a valid claim to having annual cloud revenue run rates in excess of $5 billion – AWS, IBM, Microsoft, HP, Cisco and Salesforce,” says John Dinsdale, a Chief Analyst and Research Director at Synergy Research Group. “However, on a strict like-for-like basis AWS remains streets ahead of the competition in cloud infrastructure services. Furthermore, this part of the cloud market is growing much more rapidly than SaaS or cloud infrastructure hardware and software.”

The lack of technology skills is contributing to a dent in productivity as workers struggle to adapt to working from home over prolonged periods, according to a Questionmark study. So, employers need...
Jul 03, 2020
409
0