7 Enterprise use cases for the Raspberry Pi

The Raspberry Pi of tiny computers first made an appearance around 2006 as a schematic. Today it has a family of 21 variants. With over 3 million units shipped worldwide, the Raspberry Pi is perhaps the most popular of them all. While it has blown away the student and enthusiast community with its capabilities and value proposition, it has a place in the enterprise IT infrastructure too 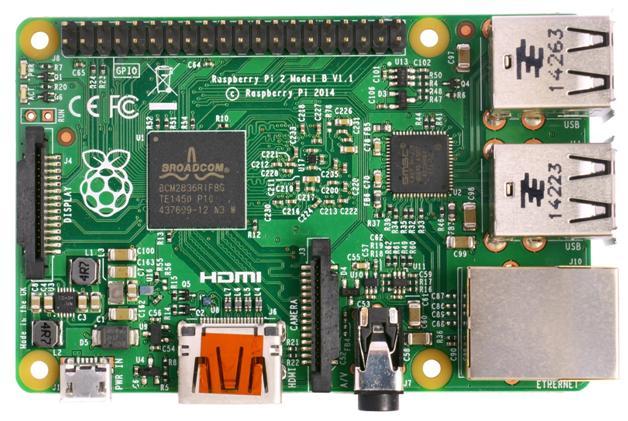 The Raspberry Pi 2 has come a long way from its original release back in 2012. Today, the Raspberry Pi 2 model offers a Broadcom ARMv7 processor, 1 GB or RAM, a HDMI and an 10/100 Ethernet port and four USB ports. The primary unique selling point of the Raspberry is actually its GPIO ports. On the 2.0 model, it has 40 GPIO pins that can be used to do a wide range of things, from connecting it up to extension boards, more Raspberries or similar tiny computers, specialized controllers for applications in display systems, robotics and more. The reason for its popularity is that it can run ARM-processor variants of popular operating systems like Fedora, Debian and RISC OS. Specialized distributions have created variants exclusively for applications like mining for Bitcoins (Minepeon), digital signage (Raspberry Digital Signage), routing (OpenWRT) and entertainment (using XBMC).

But, what is of interest to us in the business place is where and how we can leverage it to handle our day to day and infrastructural loads. And this article is about that. Of particular interest to us are three or four of its core capabilities: its ultra-low cost (at $25 each), its ability to run a stable and highly customizable OS like Linux, its GPIO extensibility and its Ethernet port.

In this article, we examine seven such uses that the Raspberry Pi can be put to in the enterprises.

However the Raspberry Pi has only a single 10/100 port. To leverage the system as a router, we need to add another Ethernet port. Thankfully, it has four USB ports and USB-Ethernet ports for both 10/100 and 10/100/1000 are easily available. However, this means that one side of the network can potentially do 1 Gbps while the other side will be limited to a maximum of 100 Mbps. If the bandwidth to your ISP is below 100 Mbps, it is better to keep the built-in port facing the Internet and the USB one facing internally (gigabit speed) and vice versa.

“iptables” i built-in to the Debian “Wheezy” port called Raspbian bundled with the Rasp erry Pi 2. We can use this to configure a good enough router, port-forwarder and firewall. It is also possible to install other routing and firewall solutions that can run on the ARM platform via apt-get, yum, untar, etc.

Network benchmarks: https://github.com/geerlingguy/raspberry-pi-dramble/wiki/Networking-Benchmarks (check out the rows for Onboard LAN and USB3 GigE for the Â“2 BÂ” model).{C}

The Raspberry Pi 2 can be configured with postfix or another favorite email server and/or SpamAssassin, and a good anti-malware product. This will give you an ultra-low cost email server with anti-spam and anti-malware.

However, running a mailbox for an office environment requires storage capacity (think of huge attachments). The Raspberry Pi 2 can use USB attached storage and network hosted storage just as easily. This lets your system command a potentially infinite storage pool to store and manage email data.

A conference room booking system is basically a palm-sized system with a touch-screen display. The display shows (on a calendar-like screen) the availability of the room in different time slots. To book the room, you would touch on a time slot, pick the duration and enter a few details such as who it is booked by, your contact information and possible a topic for the meeting. When the time in triggered, the display would show the meeting or session currently in progress and allow someone to book it for another time slot.

The Raspberry Pi 2 is perfectly suited for such a task. One can purchase a small palm-sized touch-display for about INR 5,800 (Source: http://in.rsdelivers.com/product/4d-systems/4dpi-32/32in-primary-touch-display-raspberry-pi/8417850.aspx. RS Components is a primary Raspberry Pi distributor).

For the software, there are many out of the box solutions (see: http://www.sixteen-nine.net/2013/12/03/digital-signage-answers-meeting-room-booking-nightmares/ ) or one can always roll their own using a language and platform of their choice. The beauty of it is that you can plug such an application directly into your existing calendaring solution, be it using MicrosoftÂ’s Exchange or Goo gle Calendar.

Attached to a cheap network or USB hosted storage box, the Raspberry Pi 2 can be your backup solution. You can create Cron jobs using shell scripting or Â“rsyncÂ” on the Pi to pull data to backup, on a schedule or you can push them across from elsewhere. Since the traffic would be relatively light and not user driven, performance will also be good.

This makes it a good candidate for any kind of backup Â near-line to long term.

Believe it or not, the Raspberry Pi 2 can be networked to form a cluster too! With this, it can be easily tasked to perform compute tasks. The folks at Raspberry Web Server have built a web server cluster using Raspberry Pis and also benchmarked them to see performance in both load-balanced and unbalanced modes. See: http://raspberrywebserver.com/raspberrypicluster/raspberry-pi-server-cluster-tests.html. This makes it quite useful for applications that run on Linux and need to be scalable. Adding new nodes is cheaper due to the low cost and quick turnaround time to acquire and add a new Raspberry Pi node.

Systems like DHCP, DNS are essential for the functioning of a network, but have too small a footprint to necessitate their own big boxes. Also, while the number of clients for such system may be large, both the network traffic for their purposes and the “occupation time” for a sing transaction fit within a small window. The Raspberry Pi is quite well suited to these tasks. You can use either DNSMasq, BIND or any DHCP/DNS software of your choice on the Linux system.

The best part is you could also cluster such servers (see the Cluster scenario above) to create high-availability and high-performance systems.

Want to know how your network is being used or if your employees are utilizing their free bandwidth for non-business purposes? You could deploy a passive compliance tracking system. The best part is, you can do this for both your wired and wireless networks!

Such a system would sit on the network and monitor but not interfere with the flow of traffic. Using packet inspection software, it would monitor the traffic that is flowing through and log suspicious or authorized activity to a logging system. These logs would later be analyzed by compliance/security officers for action. Both packet inspection software and forensic tools are available for free for the Linux platform.