A large majority of senior IT managers shoulder additional responsibilities 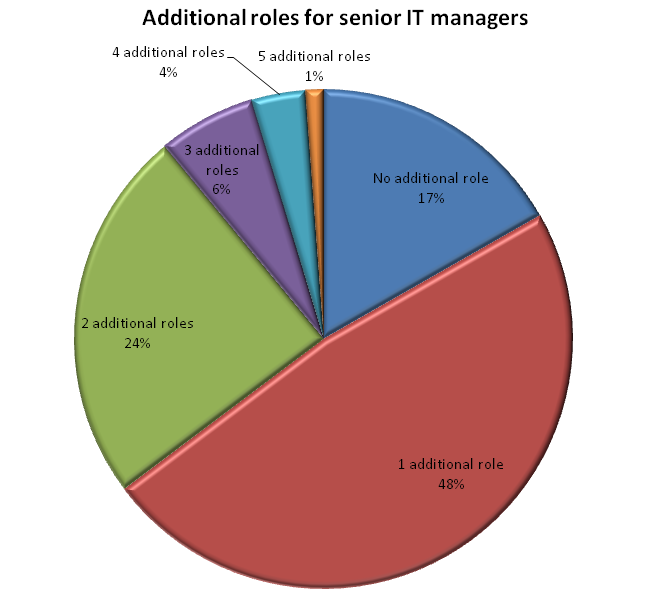 In these days of multiple skills and responsibilities, particularly at the middle and senior management levels, IT managers are no different from the rest of their colleagues.

What are the streams that senior IT managers are most likely to be entrusted wth? Purchase responsibilities top the list with 37% of the respondents shouldering purchase responsibilities. Corporate planning and strategy was a close second with 32% having roles in this area. Not surprisingly, marketing and business development roles were fairly low with just 10% of the respondents claiming such roles. An equal number were engaged in logistics and supply chain roles. Even lower was facilities management at 7%. Administration and HR fared slightly better at 12% and 13% respectively.

While it is good to note that senior IT managers are getting involved in other roles, the fact is that they are still largely limited to support and backend roles. Only a very small percentage is taking on additional responsibilities in front facing roles.

Purchase roles topping the list of additional responsibilities is particularly revealing. IT was traditionally seen as a cost centre with a large part of the IT manager’s role being the purchase of hardware, software and services, and vendor management. Looking at the data, it seems that this image has been perpetuated and IT managers in many enterprises have ended up being involved in other purchases also.Unfortunately, very few if any purchase managers have become CEOs.

Therefore, senior IT managers (and CIOs) who are ambitious and seek business and customer facing roles need to move away from the image that IT is a backend function and therefore IT managers are best suited to backend roles only. The 10% who have additional responsibilities in marketing and business development should be the role model of the others.

Note: We have defined “senior IT manager” as one or two levels below the CIO of a large enterprise; a person who heads a sub-function within IT and has a team and a budget.

There are five pivotal big data industry trends and predictions expected to emerge in 2021, according to Okera. “The COVID-19 pandemic forced companies across the board to accelerate their digital...
Jan 14, 2021
297
0