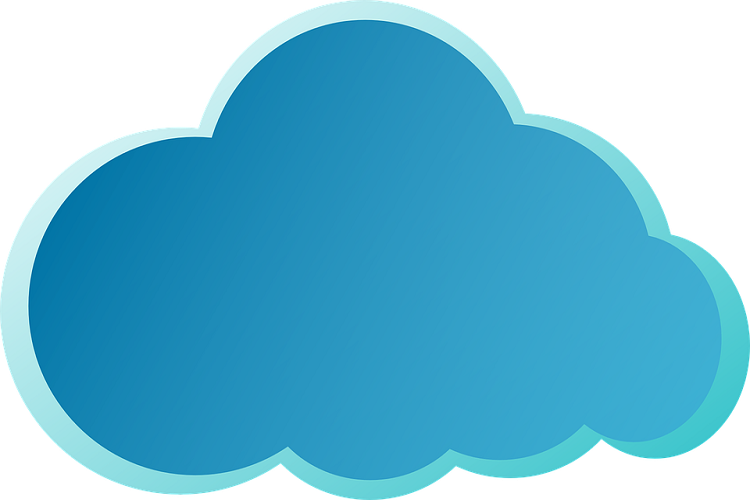 These growth rates show the market response to major adjustments in business, educational, and societal activities caused by the COVID-19 pandemic and the role IT infrastructure plays in these adjustments. Across the world, there were massive shifts to online tools in all aspects of human life, including collaboration, virtual business events, entertainment, shopping, telemedicine, and education. Cloud environments, and particularly public cloud, were a key enabler of this shift. Spending on public cloud IT infrastructure increased 47.8% year over year in 2Q20, reaching USD 14.1 billion and exceeding the level of spend on non-cloud IT infrastructure for the first time. Spending on private cloud infrastructure increased 7% year over year in 2Q20 to USD 5 billion with on-premises private clouds accounting for 64.1% of this amount.

As of 2019, the dominance of cloud IT environments over non-cloud already existed for compute platforms and Ethernet switches while the majority of newly shipped storage platforms were still residing in non-cloud environments. Starting in 2020, with increased investments from public cloud providers on storage platforms, this shift will remain persistent across all three technology domains. Within cloud deployment environments in 2020, compute platforms will remain the largest segment (50.9%) of spending at USD 37.7 billion while storage platforms will be the fastest growing segment with spending increasing 21.2% to USD 27.8 billion, and the Ethernet switch segment will grow 3.9% year over year to USD 8.5 billion.

Spending on cloud IT infrastructure increased across all regions in 2Q20 with the two largest regions, China and the U.S., delivering the highest annual growth rates at 60.5% and 36.9% respectively. In all regions except Central & Eastern Europe and the Middle East & Africa, growth in public cloud infrastructure exceeded growth in private cloud IT.

At the vendor level, the results were mixed. Inspur more than doubled its revenue from sales to cloud environments, climbing into a tie* for the second position in the vendor rankings while the group of original design manufacturers (ODM Direct) grew 63.6% year over year. Lenovo's revenue exceeded USD 1 billion, growing at 49.3% year over year. 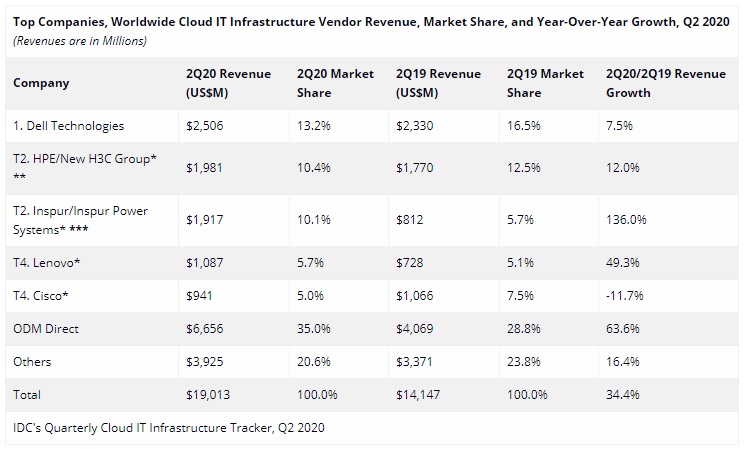 * IDC declares a statistical tie in the worldwide cloud IT infrastructure market when there is a difference of 1% or less in the vendor revenue shares among two or more vendors.

** Due to the existing joint venture between HPE and the New H3C Group, IDC reports external market share on a global level for HPE as "HPE/New H3C Group" starting from Q2 2016 and going forward. 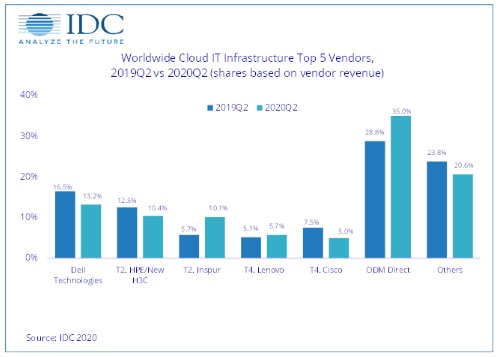 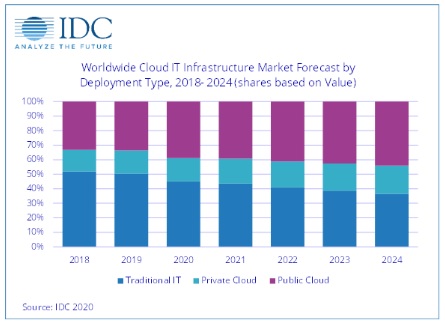