MarTech: Where exactly do the IT people fit in? 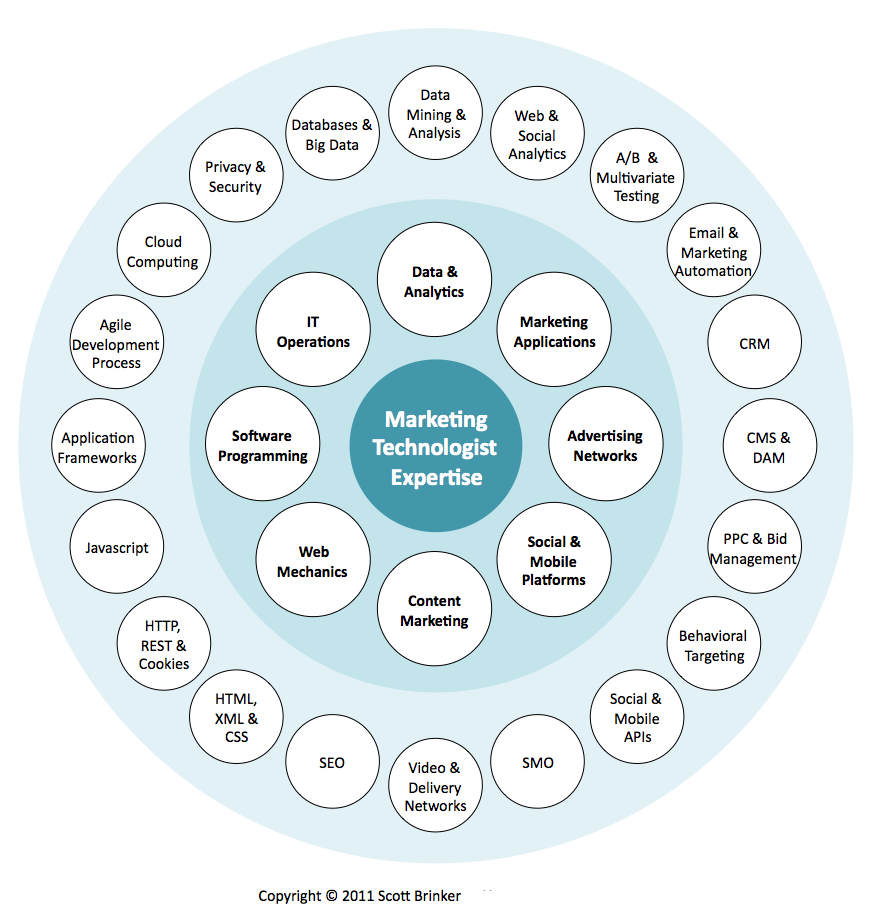 Martech. How much marketing? How much tech? The question has dominated the debate around digital transformation for quite some time now. Martech, after all, is the basic building stone of digital.

Yet, for reasons not really incomprehensible, that debate has been largely political—who will control the digital transformation journey, a subtle point being who will control the martech budget? Gartner’s prediction in 2012 that CMOs would be spending more than CIOs on technology by 2017, fueled the debate that still refuses to die down.

(See Digital Agenda: Back with the CIO?)

Yet, if you look beyond the political undertones—with the assumption that the truth is never black-and-white—it makes extreme sense to go a level deeper to see what kind of roles will go to marketers and what kind of roles would come to the tech people.

This article tries to seek answer to the second part of the question—what are the roles that IT guys can play in the martech landscape. The second aspect it will touch upon as a logical next step is: what kind of tech skills will be important for a marketing technologist.

The article, compiled by CIO&Leader, draws from available credible research.

In a joint article titled, The Rise of the Chief Marketing Technologist, in the July-August 2014 issue of Harvard Business Review, editor of the ChiefMarTech blog Scott Brinker and Gartner VP Laura McLellan, the person behind the famous CMO-spending-more-than-CIO prediction, argued that a new type of executives called chief marketing technologist (CMT) is emerging. They have different tiles in different organizations but basically do similar functions of ‘aligning marketing technology with business goals, serving as a liaison to IT, and evaluating and choosing technology providers’.  CMTs, they said, “are part strategist, part creative director, part technology leader, and part teacher.”

Around the same time, Sapient-Nitro, the digital marketing agency, with significant IT services business, published the results of its marketing technology survey. It found that though majority of organizations did have a chief marketing technologists though they may not be all alike. The most important  contribution of this study was to classify the CMT’s role into six distinct archtypes: Marketing Mavens, Data Divas, Content Curators, Infrastructure Architects, Experience Engineers and Media & Marketing Analyzers.

Together, they accounted for 48% of all CMTs—or almost half. This is against the popular perception that martech is completely controlled by people with marketing people.

This is how the study described these three positions.

An IT professional can look at taking up either of the three roles.

Data Divas are typically those with expertise in BI/analytics, data management software and are often experienced in CRM too. These are the people who are often (68%) the top marketing technologist in organizations.

Infrastructure Architects are the classic tech guys who understand platforms, technology architectures, software and system integration and many even know a bit of coding and programming. These are the people who would be comfortable in the company of other techies.

Experience Engineers are the new generation technologists. Some of the best minds from engineering and technology are getting into this area. In terms of technologies, they typically know ecommerce, front-end technologies, mobile, app development etc but they are excited by the experience that they provide to the user.

Why it’s an opportunity, not a threat?

The most important question for a tech professional, of course, is if I can take the role.

Despite a major marketing slant—marketing titles and reporting relationships with the CMOs—most come from technology positions.

As many as 47% of all chief marketing technologists come from a technical/programming background, as compared to 39% who come from business background and 37% come from marketing/communication background. The picture depicts the specific tech skills that the CMTs come with. 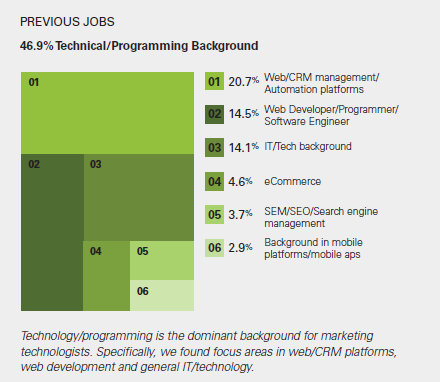 A 2011 model that Scott Brinker of ChiefMarTech presented on essential marketing technologies can still be a good starting point for those wanting to understand where to focus their energy on. The lead picture shows a pictorial depiction of that.